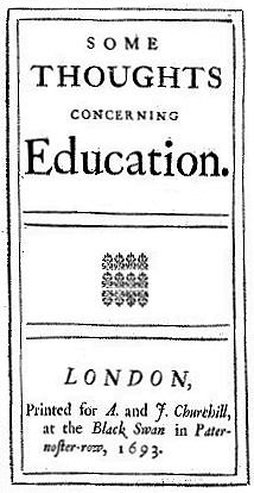 Importance: perhaps Locke's most radical assertion in Concerning Education is that a child's mind is a blank slate, and thus knowledge can only be gained through experience.  He outlines three methods necessary for properly developing a child: the encouragement of physical strength, the instillation of moral character, and careful education.  In terms of education, Locke generally advocated the sciences over humanities: an opinion consistent with the contemporary scientific revolution's break from scholasticism.  Also important was Locke's theory of the 'association of ideas': that the connections made between various ideas in early life will be stronger and longer lasting than those made in adulthood.  The impact of Concerning Education on the 18th century was profound.  Over one hundred years later both Sarah Trimmer and Maria Edgeworth, among others, continued to promote various aspects of Locke's work in their own writings.