Emile: or, On Education 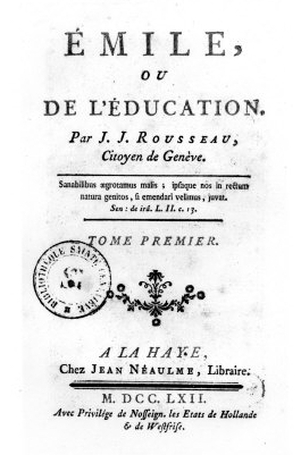 Importance: a novelization of Rousseau's attempt to construct an education system that would allow 'natural man' to enter society without being ruined (ideas further explored in his Of The Social Contract, 1762).  Emile is an early bildungsroman, following the education and development of Emile in various stages from childhood to adolescence as he becomes the perfect citizen through proper education.  Perhaps the most controversial argument of the text is that children cannot understand the abstract ideas associated with religion, so it is dagerous to introduce them to religion before they turn ~15.  It is also worth noting that outside of the passage containing this argument, religion is absent from both the novel and the education of its eponymous character.  In the final section of Emile, focusing on the education of Emile's betrothed, Sophie, Rousseau states that women should be denied the same rational education in order to be "made specially to please man."  This stance was intensely criticised by Mary Wollstonecraft, and more generally by Sarah Trimmer.