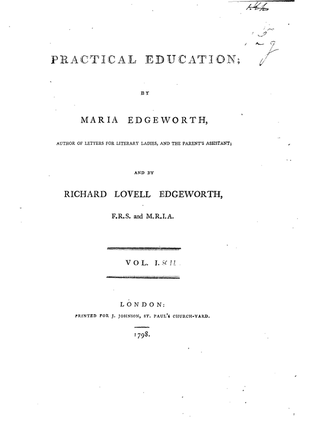 Importance: this two-volume work on education theory combined various elements of Locke's and Rousseau's philosophies.  In it, the Edgeworths argue that a child's experiences are necessary for attaining knowledge and forming their character, and that early mental associations will last for the remainder of the child's life (based on Locke's 'association of ideas').  They also promoted education through entertainment, play, and experimentation.  Unlike most other authors on the time they discouraged discussing religion with children, and using fairy tales as children's literature.