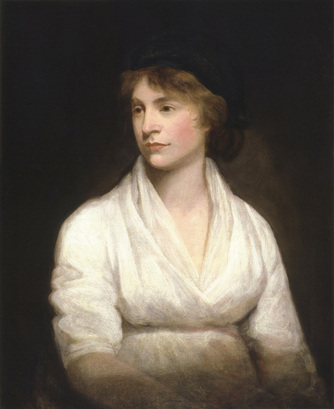 Literary Biography:
After a difficult and financially uncertain childhood, Mary Wollstonecraft tried to find a place in English society.  She founded a school with her sisters and her friend, Fanny Blood, but the school eventually failed after Wollstonecreft left to nurse the ailing Blood in Europe.  She then became a governess for a single year before deciding to become an author.  Her frustrations at finding suitable work became a chapter in Thoughts on the Education of Daughters (1787), and her experiences as a governess influenced her children's book, Original Stories from Real Life (1788).
Wollstonecraft also wrote various other treatises, novels, a travelogue, and a history of the French Revolution.

Important Children's Literature: her only children's book, Original Stories from Real Life (1788), is similar to her education treatises in its focus on the education of women using middle class ideals.

Impact on Children's Literature: Wollstonecraft wrote several instructional and educational texts, including Thoughts on the Education of Daughters (1787) and A Vindication of the Rights of Woman (1792).  She also compiled a literary anthology for young women, The Female Reader (1789).  In her works she promotes middle-class values of discipline, moderation, honesty, and Lockean reason.