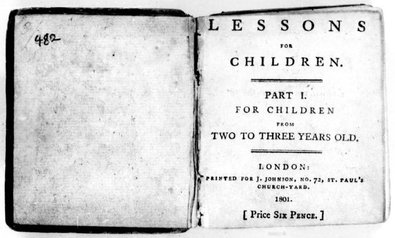 Summary: a variety of didactic conversations between a mother and son, aimed at specific age groups and becoming more difficult from part to part.

Importance: equally important for its use of a conversational style and its recognition that children progress through reading stages that require different levels of difficulty.  The text only discusses simple, concrete subjects (it does not mention religion, unlike Hymns in Prose for Children (1781)): beginning with the seasons and days, it progresses through simple narratives and eventually reaches complex subjects like minerals and a description of metapmorphosis.  It was also one of the ealiest examples of experiential pedagogy (based on Barbauld's own experience teaching at Palgrave Academy), and inspired several other women to become children's authors: including Maria Edgeworth, Sarah Trimmer, and Ellenor Fenn, among others.  Lessons also influenced Romantic poets like Wordsworth, Blake, and Coleridge. 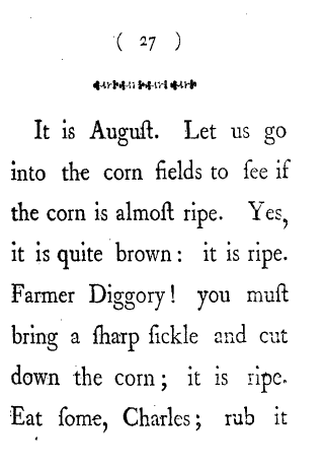 A sample from the beginning of a conversation