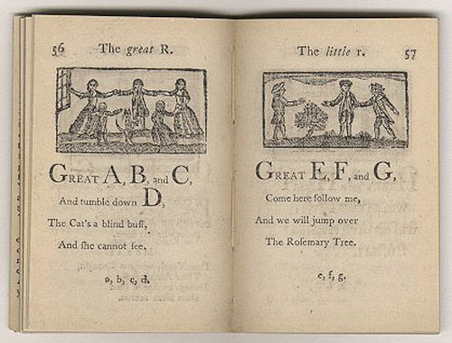 From Newbery's A Little Pretty Pocket-Book (1744)
The development of English-language children's literature took huge strides forward during the 18th-century, especially in Britain.  This site is intended to serve as a compendium of influential texts, authors, and scholars that helped shape the development of children's literature during this period.  The provided summaries, biographies, and indeed the lists themselves, are far from exhaustive, but instead are designed to introduce and acclimate the reader to a large body of works spanning an entire century (give or take a few decades).  Hopefully this site will provide a solid foundation for any further research which it inspires.

As you explore you might notice trends such as the attempt to create an appropriate form of dialogue with children, an emphasis on using entertainment to promote moral growth, the mixing of religion with children's books, the growing recognition of children as essentially different from adults, and the recognition that there are distinct and progressive stages of reading development.